We found that the newest Phlizon 1200w LED grow light model has made strides over its last version during our Phlizon 1200w review.

If you are considering buying the Philizon 1200w you can rest easy knowing that your hard-earned money will not go to waste with this 1200 watt LED grow light.

There are a couple of things you should consider, however, if you have your eyes set on the Phlizon 1200w.

Our Phlizon 1200w review is here to break it all down and help you decide if the benefits of this LED plant grow light are right for you.

The 1200w High Power Series Phlizon is an upgrade to some of the previous Phlizon grow light models. It is the smallest wattage version of this light which also comes in a 1800w and 2000w version.

A good benefit with the Phlizon 1200w is it is a perfect LED light for small scale growing.

If you are looking for an LED grow light that promotes plant growth in a 4×4 grow tent the Phlizon 1200w has enough power to grow big buds and yet only use a fraction of the energy that an HPS bulb might use.

Like many 1200w LED grow lights, it comes with the standard features you would normally find for growing indoor plants, plus some extra features that set this LED lamp apart from others.

Along with its veg switch and bloom switch, the Phlizon 1200w uses 10watt double switch chips sets for a more balanced natural sunlight PAR. With the addition of extra blue and red full spectrum lighting, the Phlizon 1200w mixes the right light that your plants need throughout its growing phases.

On top of that, the veg and bloom switches are easy to operate and straight forward which also makes this LED light user-friendly.

The Phlizon newest 1200w LED has a recommended core coverage area of about 3×3 feet which is not huge, however, the addition of being able to daisy chain the lights together makes it expandable should you move into a larger growing area.

If you are worried about operating a 1200w grow light in a small area, don’t worry, the full spectrum design of this LED grow light runs very cool.

It has double cooling fans along with a cooling heat sink to ensure your heat resistant plants stay in their proper temperature range for quality indoor growing.

One nice thing about these lights is they are backed by 30 days money back guarantee. Not only that they boast a warranty lasting 2 years should something fail in that time frame.

You probably won’t have to worry much about the lights failing, however. Phlizon adds quality components to each and every light.

The Phlizon 1200w is said to last at least 50,000 hours which is more than just a couple of growing seasons easily.

Because the 1200w newest Philizon grow light uses universal blue, red, IR, UV and white light it is able to deliver almost sun-like spectrum to plants. This is something your plants will love.

Great light distribution in this 1200w HPS MH replacement, that will also help you save money on expensive electricity bills.

Phlizon makes it easy with this 1200w version to veg and flower your plants with an easy toggle switch to adjust the lighting spectrum.

With just a flip of a switch, you can easily cycle between your plant’s stages without having to swap out one grow light for another. 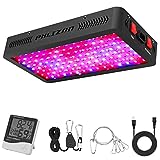 As you can see, Phlizon makes a useful and affordable 1200w power series grow light. The Phlizon 1200w is perfect if you are new to indoor gardening and/or don’t have a ton of money to invest and want to get started growing indoor plants.

With an easy to use LED grow light such as this, there is no doubt why this LED light gets so much hype.

Phlizon is a professional LED grow light manufacturer with an eye on building quality lights through research and development.

Every Phlizon grow light tested uses quality 10-watt bulbs. In the 1200w power series model, there are a total of:

Each part of this grow light is tested thoroughly to produce plant-loving light at Phlizon’s labs. Their goal is to produce LED grow lights with high PPFD for maximum plant growth. They also test PAR and spectrum wavelength thoroughly, not only in the Phlizon 1200w model but for all the models they carry.

We hope you found the Phlizon 1200w review useful and we wish you a happy growing season. Although Phlizon is not the best manufacturer of LED grow lights, they still, at a great price point do a wonderful job at growing plants indoors.

These lights are perfect for beginners or those who want to save a few bucks starting out. They will get the job done and provide enough light for flowering and veg stages for your plants.